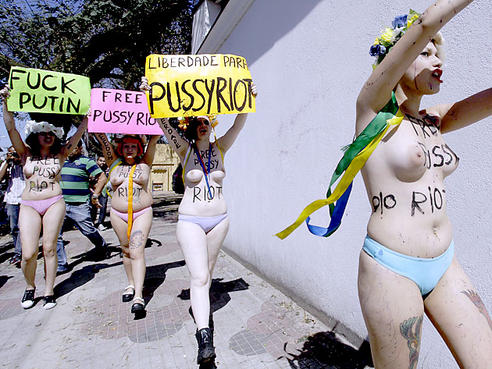 FEMEN activists protest in support of Russia’s Pussy Riot punk band outside the Russian consulate, carrying a sign that reads in Portuguese “Freedom for Pussy Riot,” center, among others in Sao Paulo, Brazil, Wednesday, Aug. 15, 2012. Protesters showed their support for the band’s three female members who have been in jail for more than five months because of an anti-Vladimir Putin prank in Moscow’s main cathedral. On Friday, activists in more than a dozen cities are expected to take to the streets one hour before the judge is to issue the verdict. (AP Photo/Nelson Antoine)